At Last Places we like to describe as the Yemen of Africa for being a country of proud people, an immense territory largely occupied by desert and for being a complex, beautiful and exciting destination. Chad and Yemen are states with their own roadmap, parallel and out of step with boring globalization.
Chad was also closed to the world until a few years ago, which allowed it to preserve its most authentic side, like Yemen.

Joan Riera co-founder of Last Places traveled to Chad for the first time in a long time ago in 1998. At the time Joan was a young anthropology student at the Richmond University, England. At that time one of his passions - which he has not yet abandoned - were the last tribal peoples with their own worldview and aesthetics. He traveled to southern Chad in search of the latest 'canard' women in their French version or 'duck'. It was the town that had pushed the practice of piercing the upper and lower lip of women as a symbol of beauty and social status the most to the limit. Women from the Sara-Kiabé tribe had even been exhibited at colonial fairs during the 1930s in Paris as examples of human oddities. The French administration definitively banned the practice in 1944 and I was able to meet the last 4 double-bowl 'canard' women. It was an exciting and at the same time nostalgic experience because we were visualizing a world that was disappearing.
After that first ethnographic experience, Last Places has established itself in Chad and is one of its most esteemed destinations for the authenticity of the country and the great potential traveler both on the cultural and natural front. 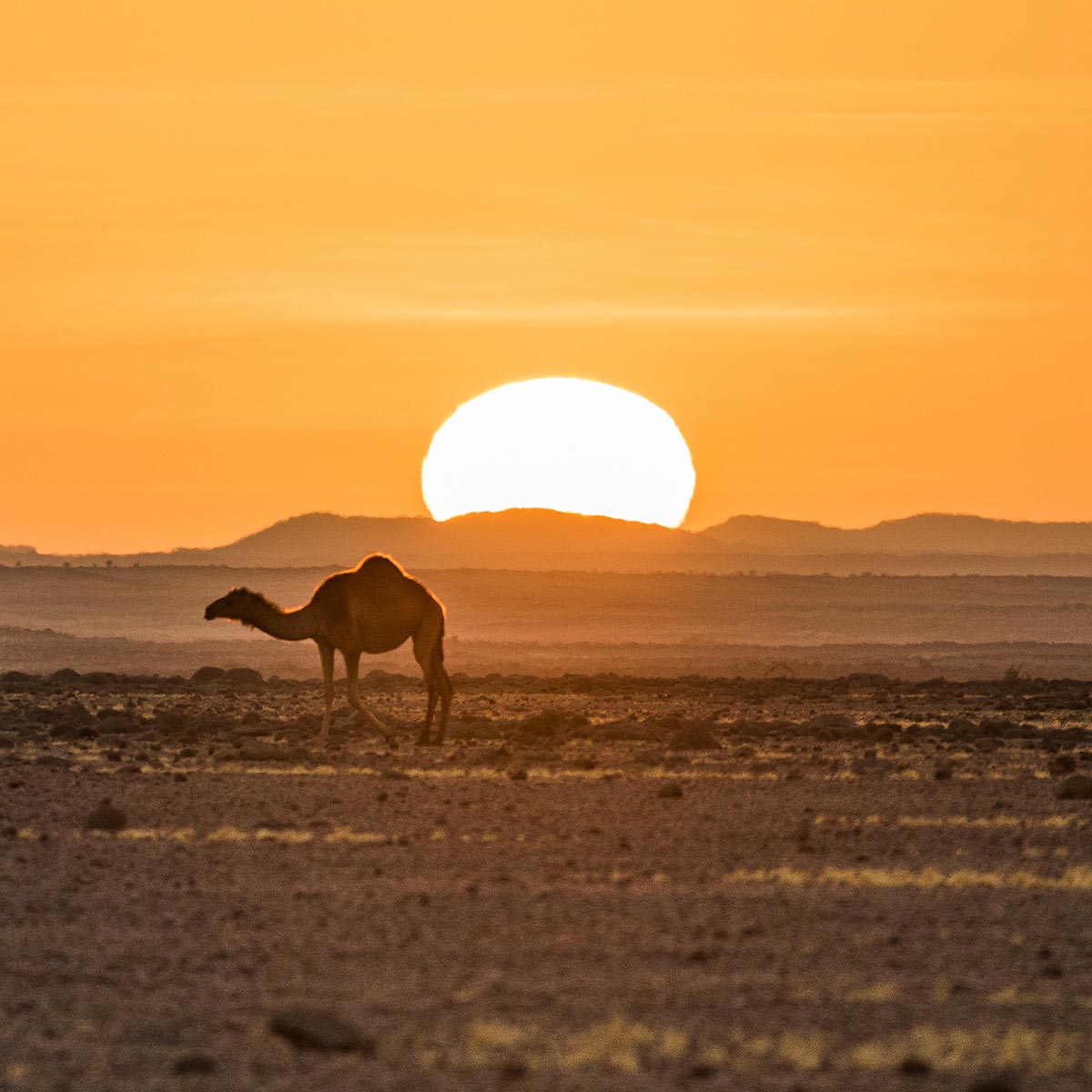 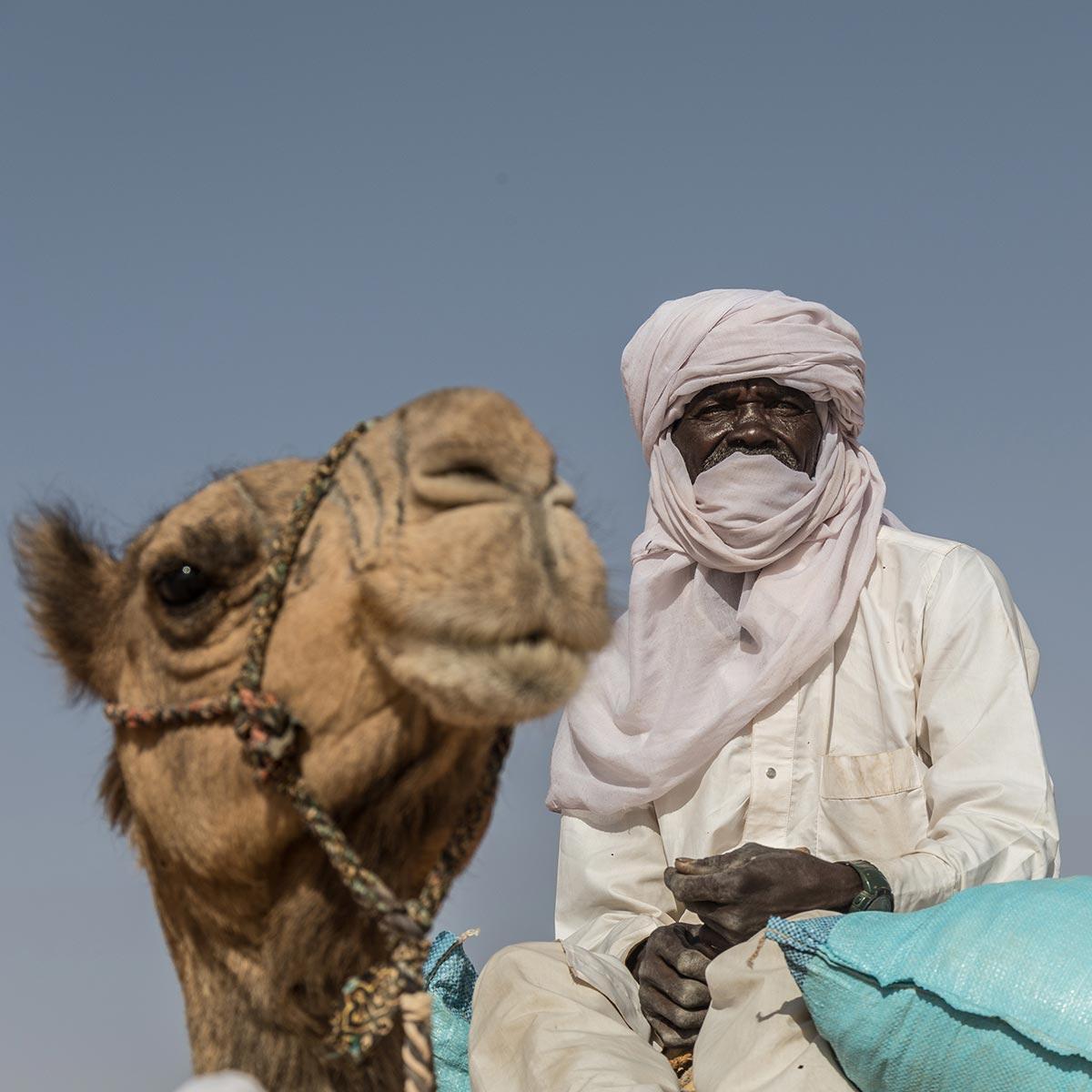 A region with a magical balance between human and natural is undoubtedly the Ennedi, one of the jewels that we visit in Chad during the cooler months between January and March. 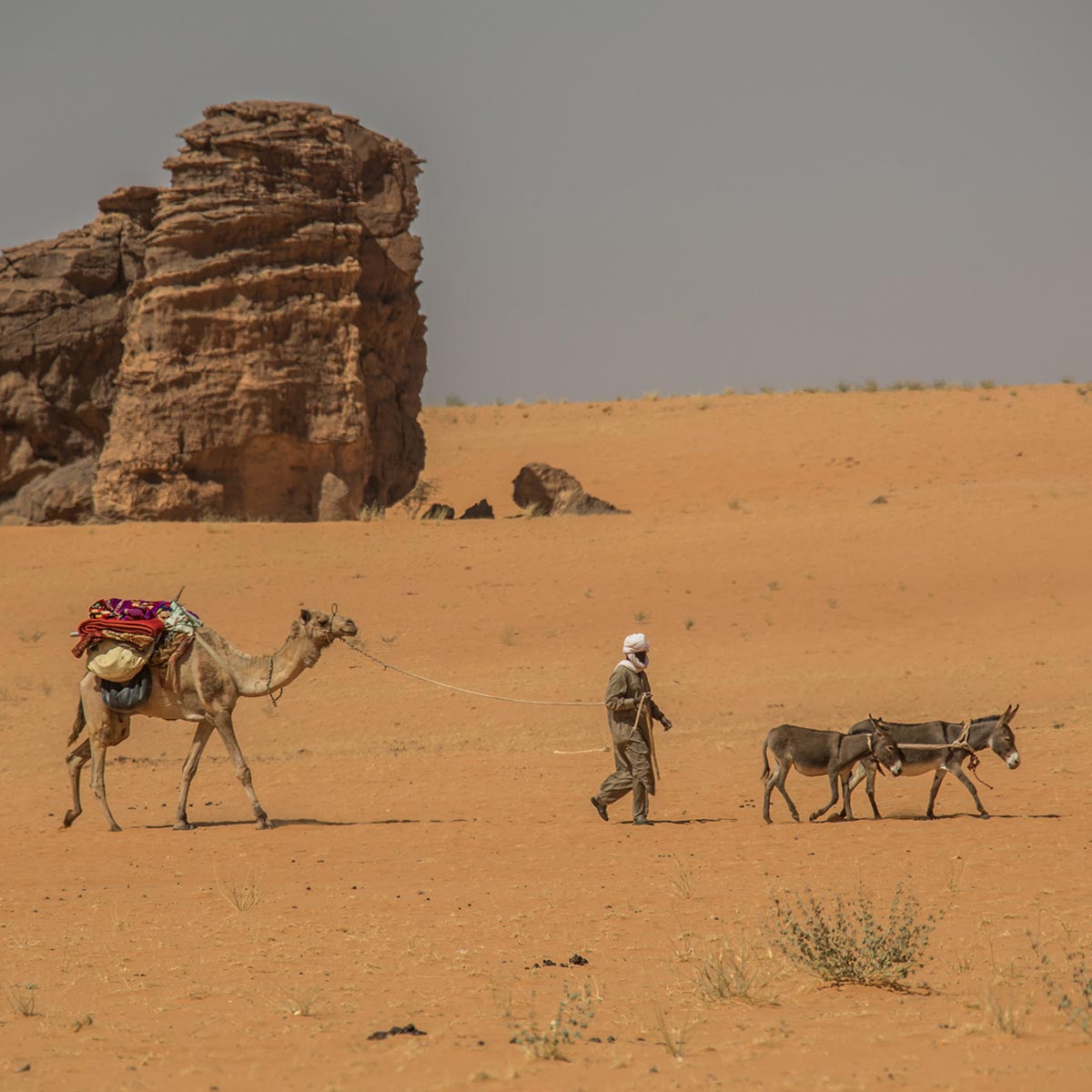 The Ennedi Plateau, northeast of Chad, is an immense rock and sand desert that is part of the Great Sahara Desert. It is considered one of the most impregnable and isolated regions on the planet, being bordering Libya and Sudan. 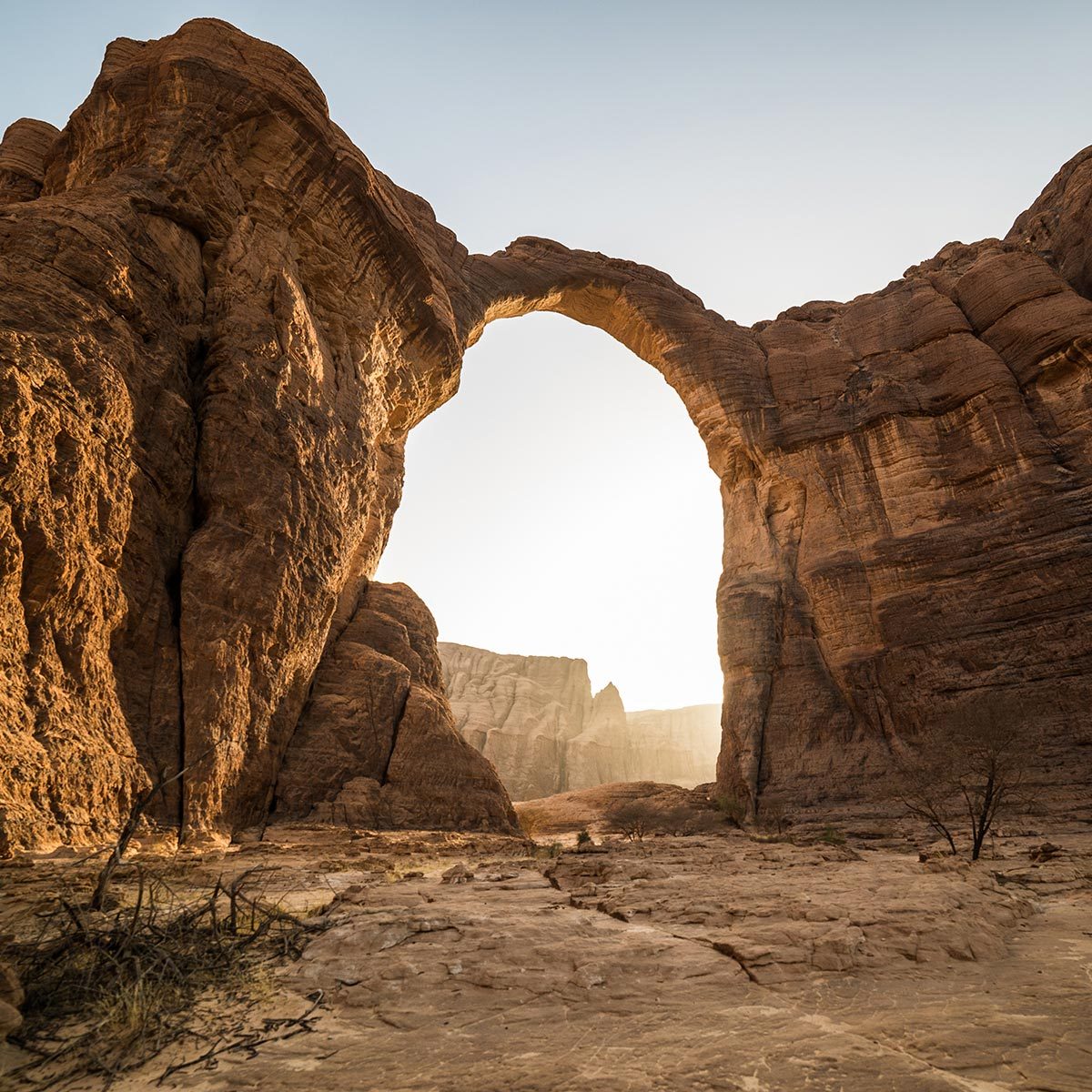 The great canyons that cross this region, its sandstone rock arches, the scattered nomadic towns and the desert fauna, are the differentiating elements that dot this monotonous and orange landscape. Along with the hundreds of tanks, belonging to the war with Gaddafi and abandoned to their fate in this hostile environment. 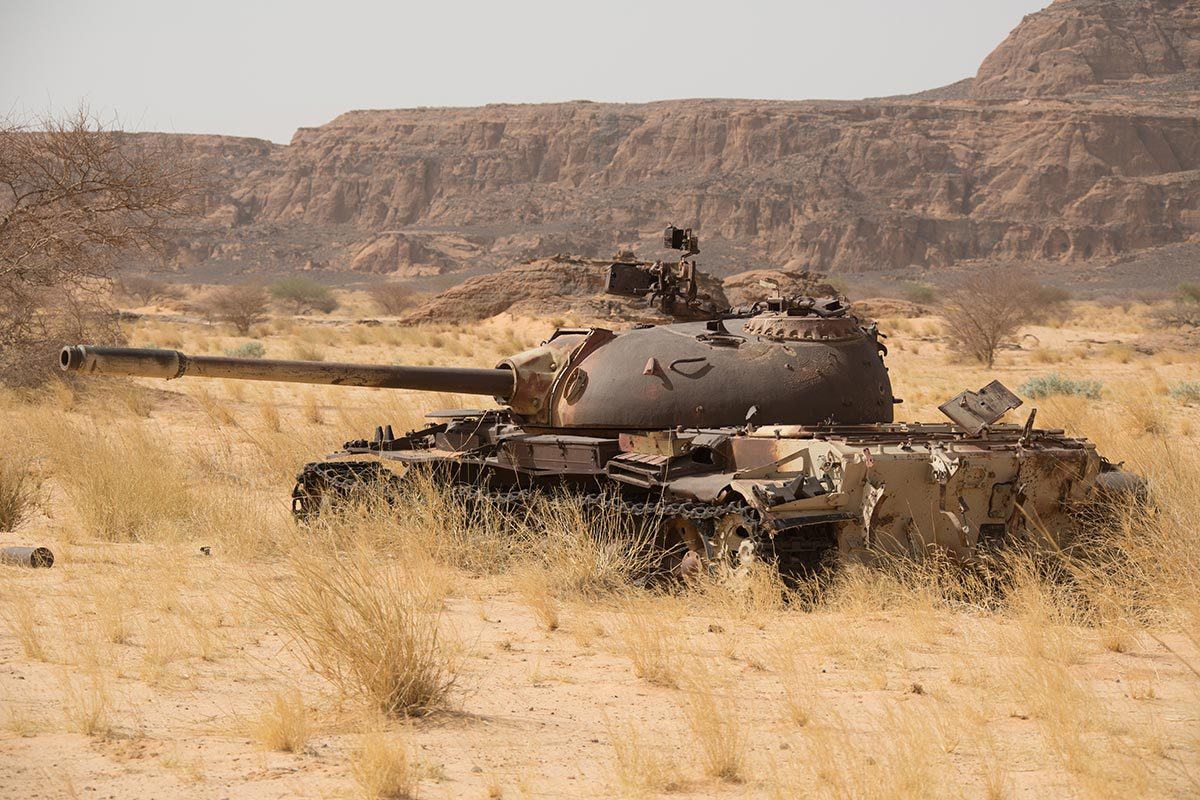 The gueltas (deeper places, at a geological level, that contain water) are points where camels and rare specimens of crocodiles converge to quench their thirst as a result of the hard climate. It is the only refuge for the little fauna and flora of the region, as well as one of the most important places of social interaction for the inhabitants of the area. 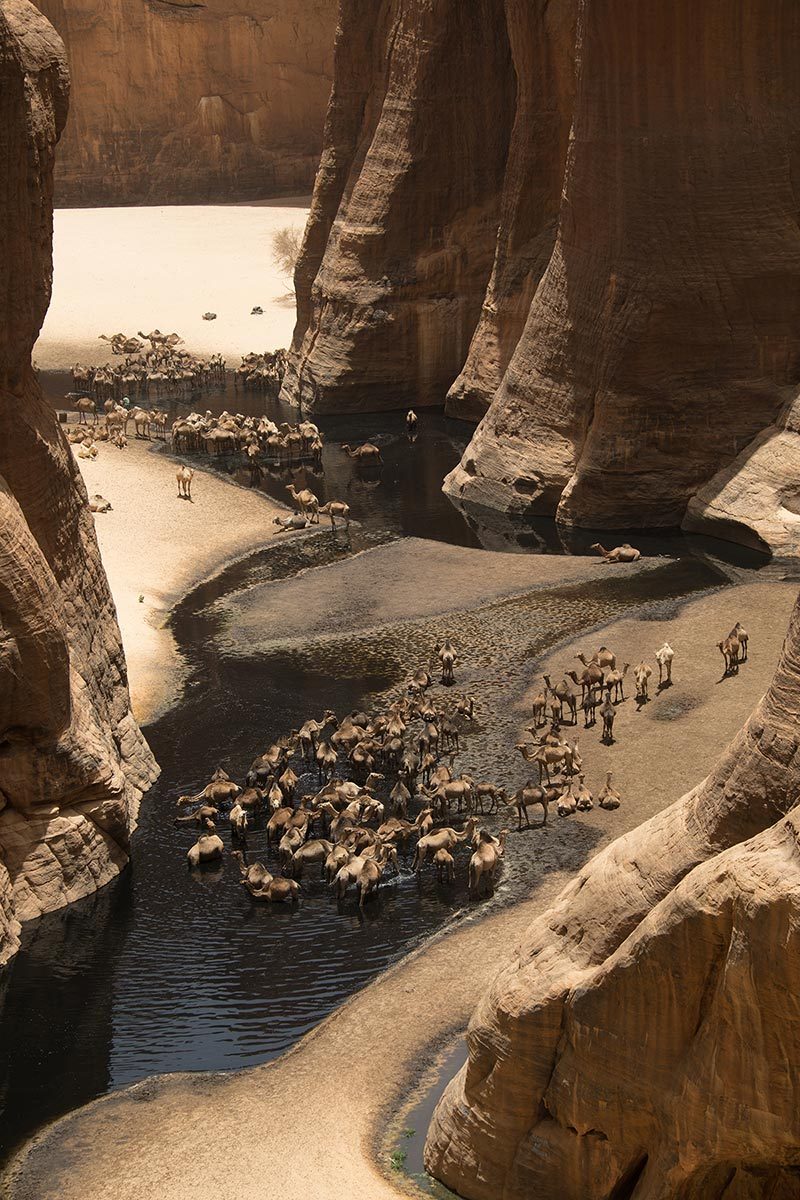 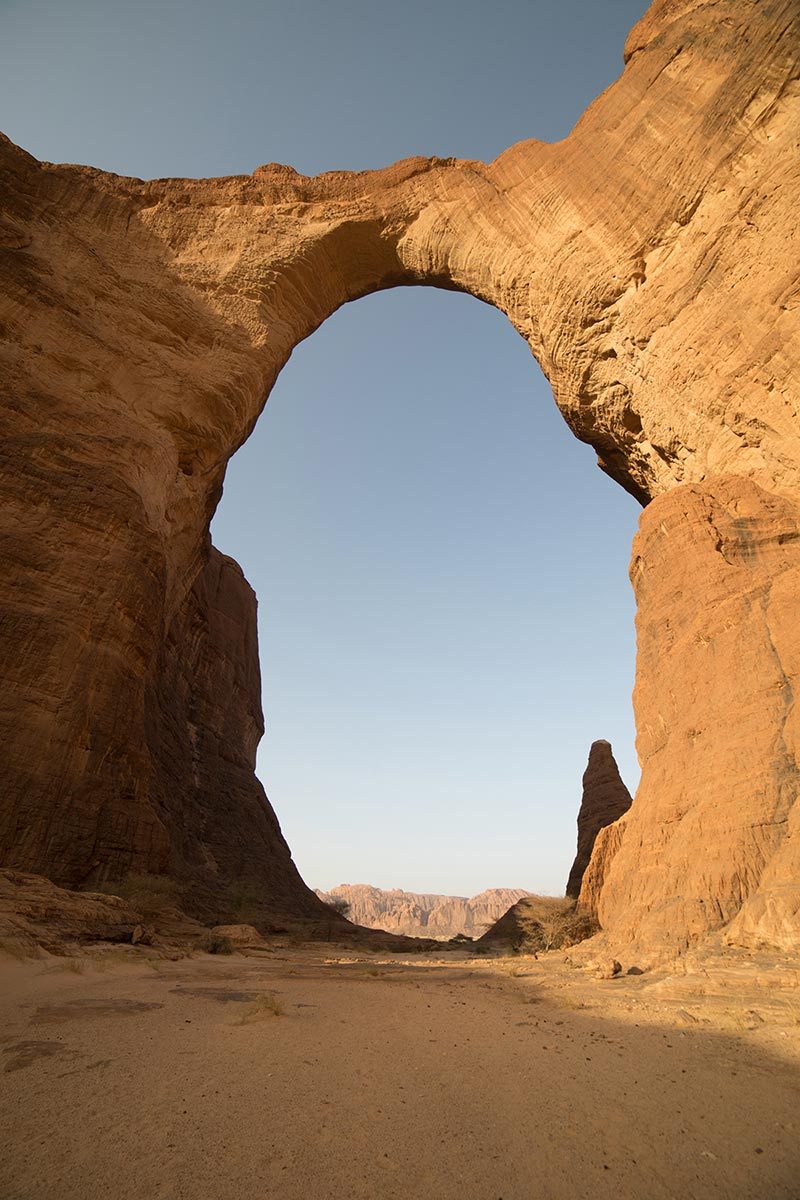 Among the geological features that Ennedi contains, the world's largest stone arch (Aloba Arch), the Guelta d'Archei and the impressive lakes of Unianga stand out. In relation to fauna, we find: dwarf desert crocodiles (Crocodylus suchus), white oryx (Oryx dammah), desert foxes (Vulpes zerda); and according to some legends, also lions from the Sahara and some species of saber tooth tiger. 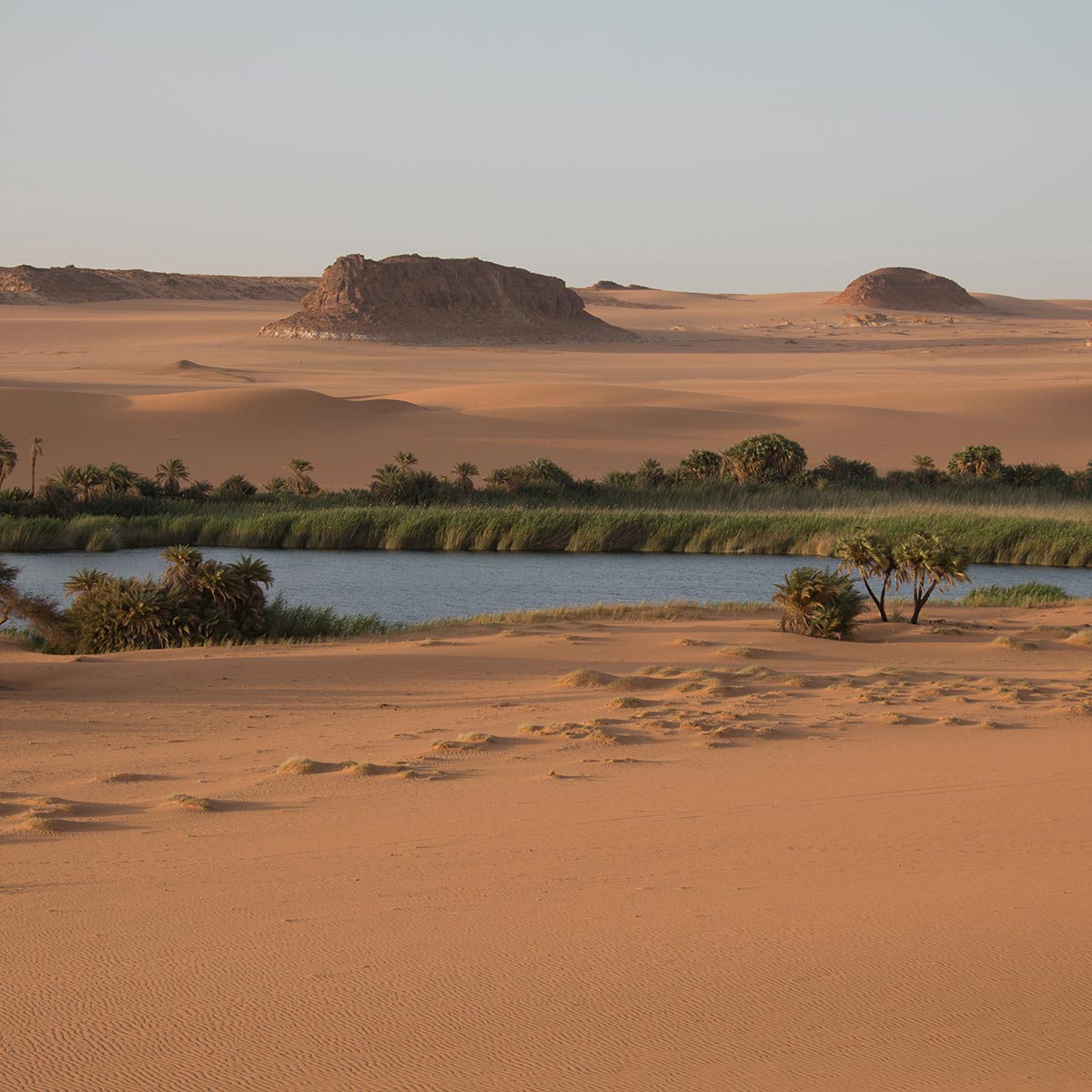 Additionally, this region has Holocene cave paintings and the highest concentration of nomadic population in the world. 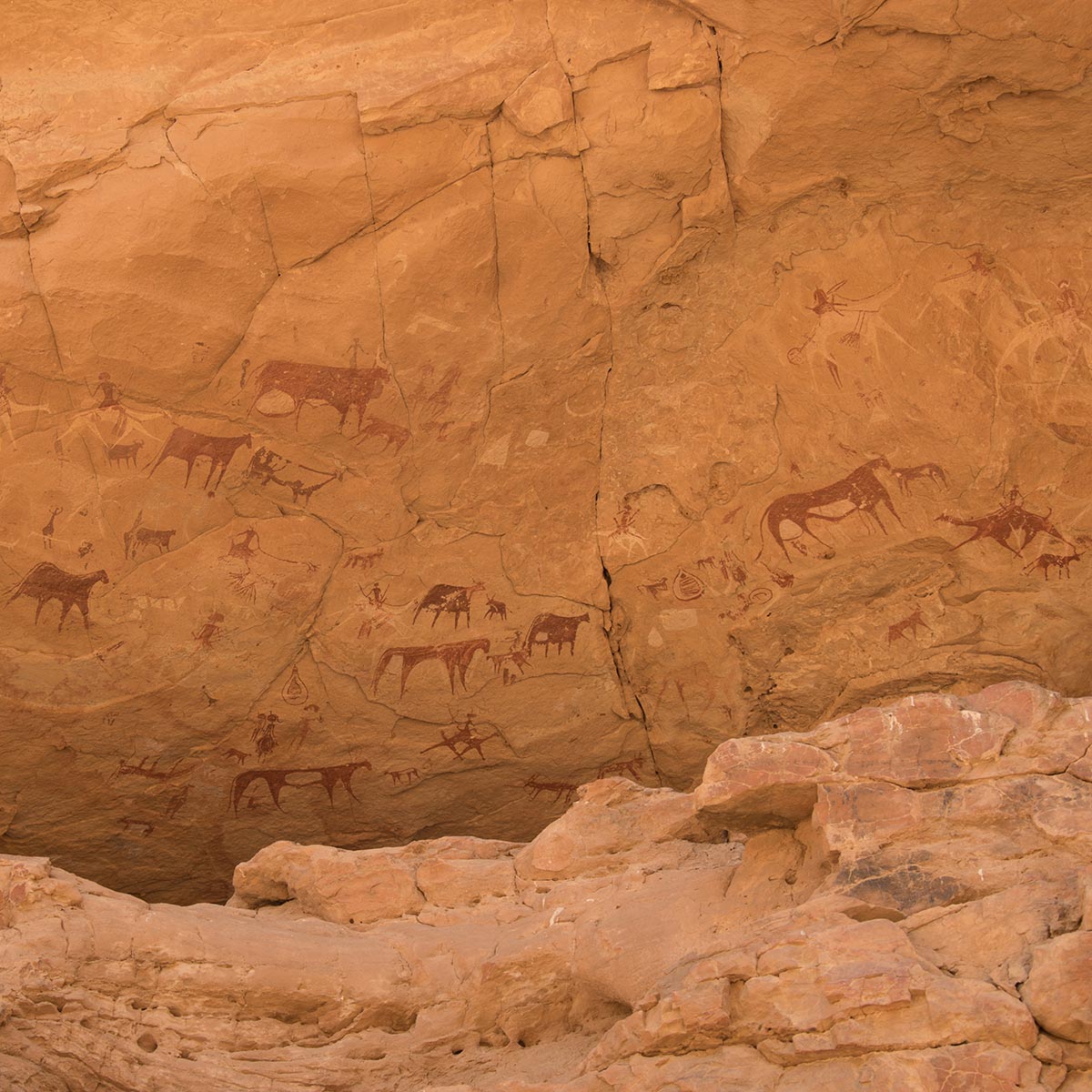 Another of the great attractions of Chad is the guerewol or gerewol. The Gerewol is an annual festival that has as key point the courtship competition of men towards women. 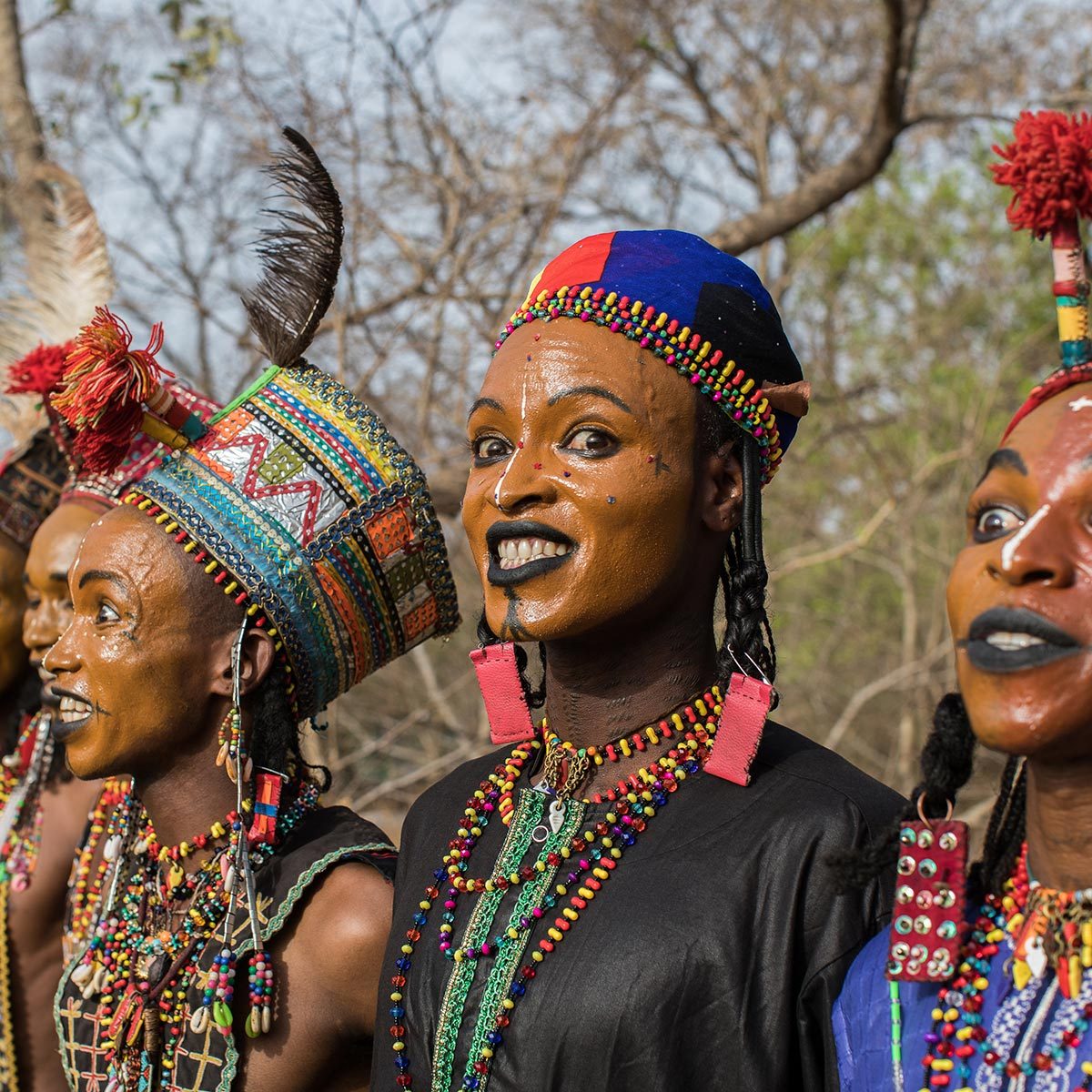 It is carried out by the Wodaabe people (Fula, Funali, Peul or Bororo), especially in Niger. Although it is also celebrated in other areas such as: northern Cameroon, southern Chad, and even some regions of Sudan. 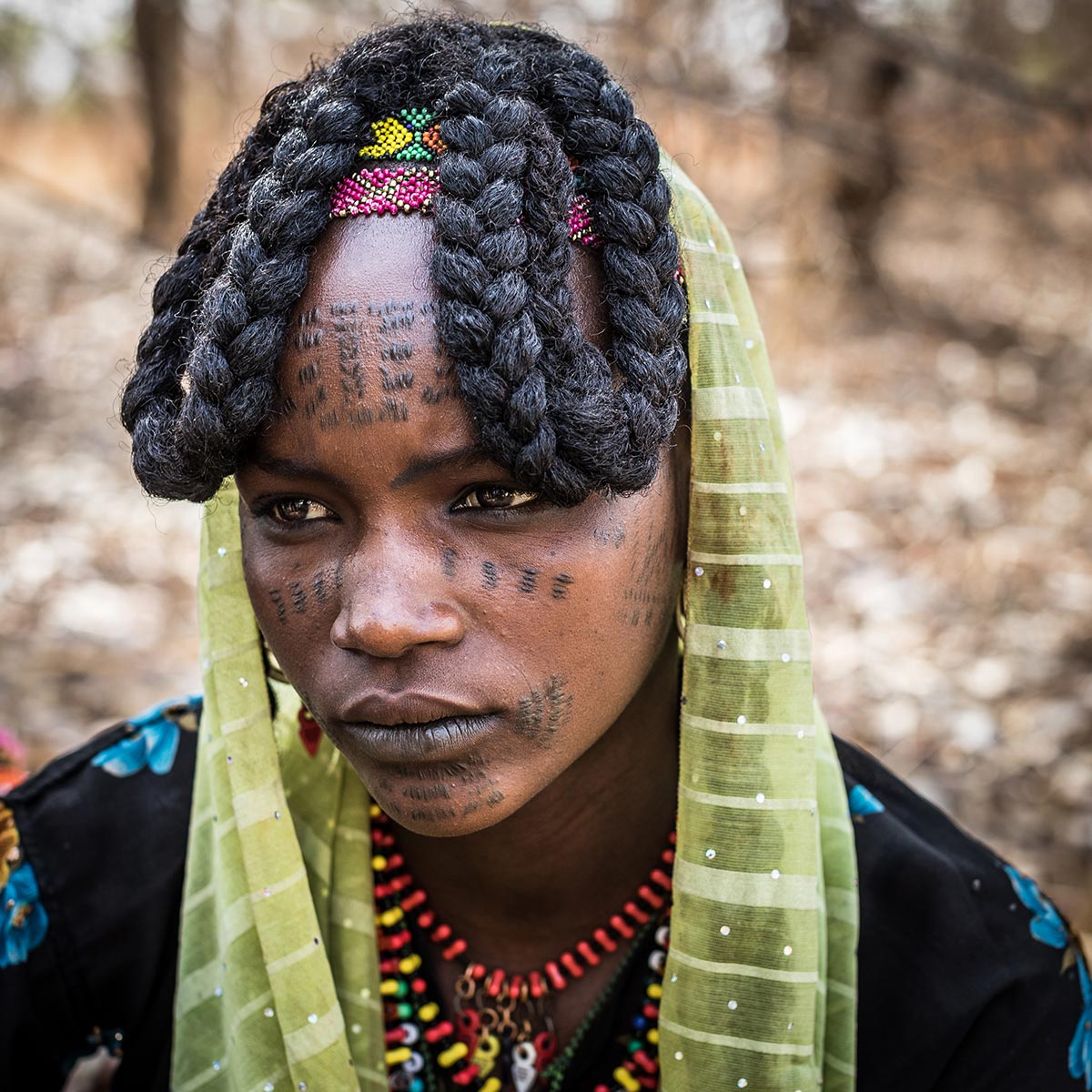 The Wodaabe are one of the most enigmatic ethnic groups in the Sahel. Being a Fulani subgroup, which are distributed, in nomadic settlements throughout Central Africa. Wodaabe means "people of taboos", and this is because they have a strict moral and conduct code (called "Pulaake"), which leads them to value discretion, patience, sacrifice, integrity and modesty. Social codes include not looking anyone directly in the eyes, not holding hands in public and not calling family members by their names. This makes their social interactions seem covered in modesty. Their language is Fula and they do not have writing, transmitting the tradition orally. 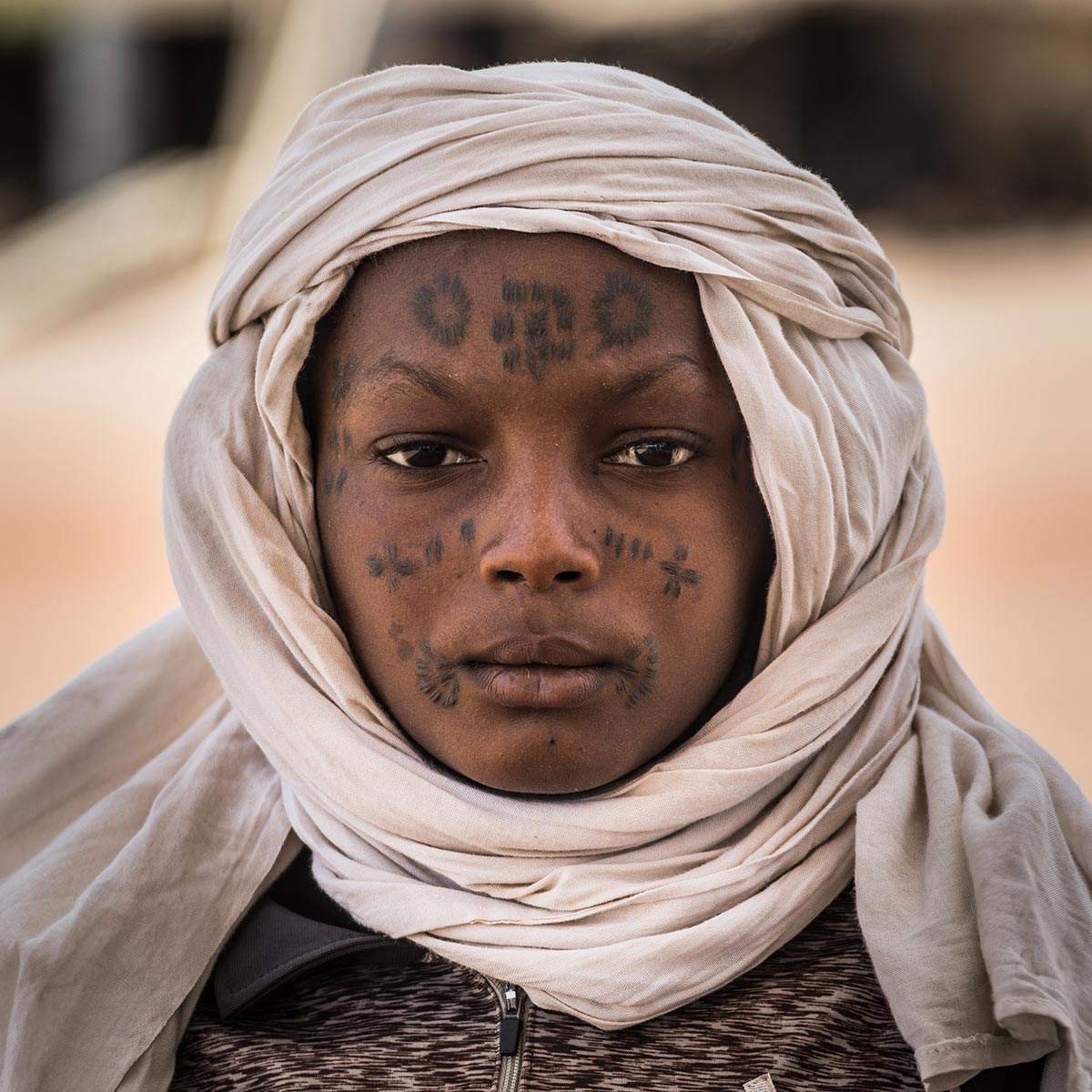 It is an elusive group. They always say they prefer to stay on the sidelines, and if someone approaches their tree, they go to another one. However, when it comes to aesthetics, they seem to break that shyness and that modesty. They call themselves "the most beautiful peoples in the world", and they are decorated with eye paint, a multitude of ear piercings, tattoos and facial scarifications; in addition to impossible hairstyles, in the case of women. 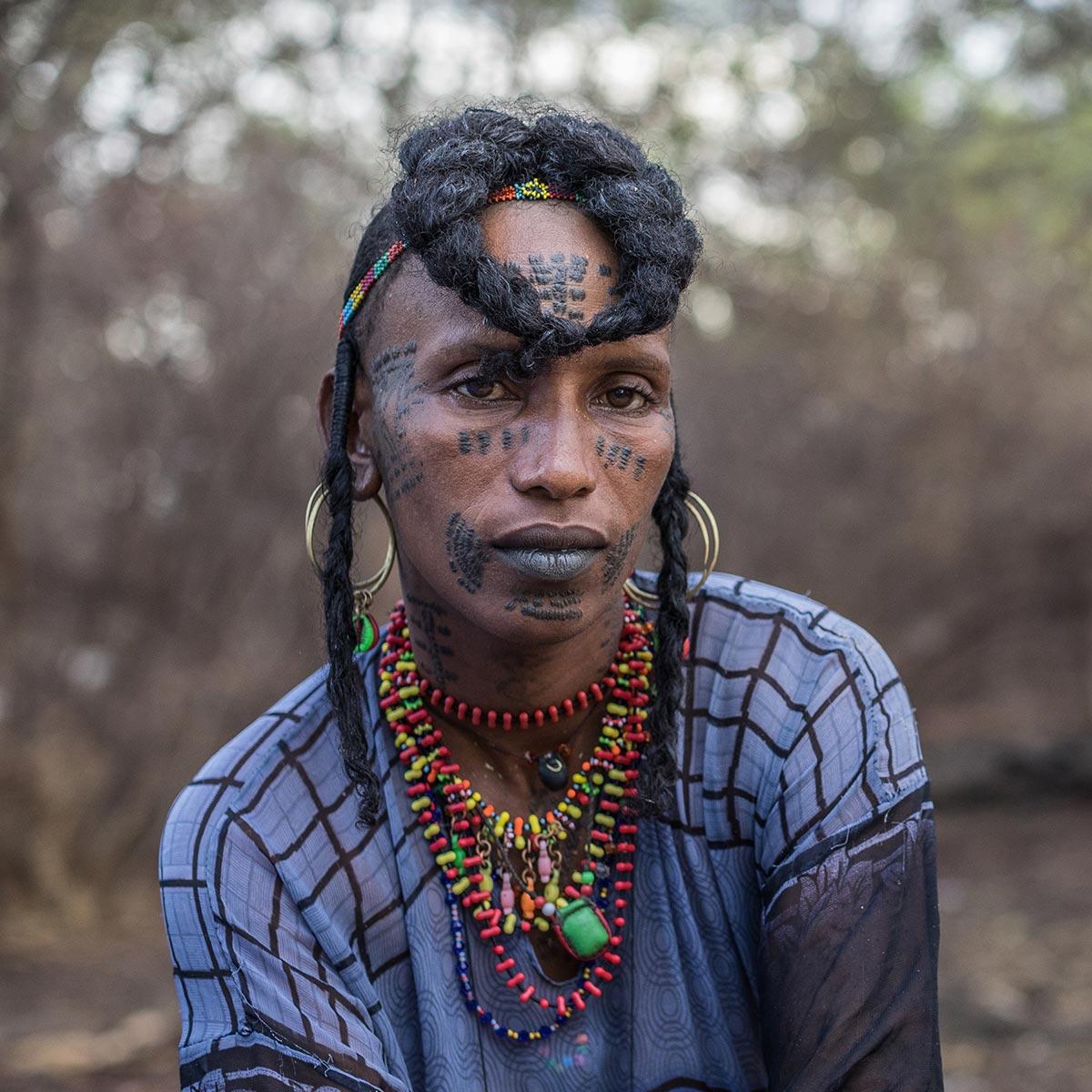 In the highest representation of this pride for their beauty, during the Gerewol festival, thousands of young people, dressed in ornaments and fully decorated, gather -before dispersing in search of pastures at the beginning of the dry season- to dance and sing in rows, trying to attract the attention of young marriageable women. 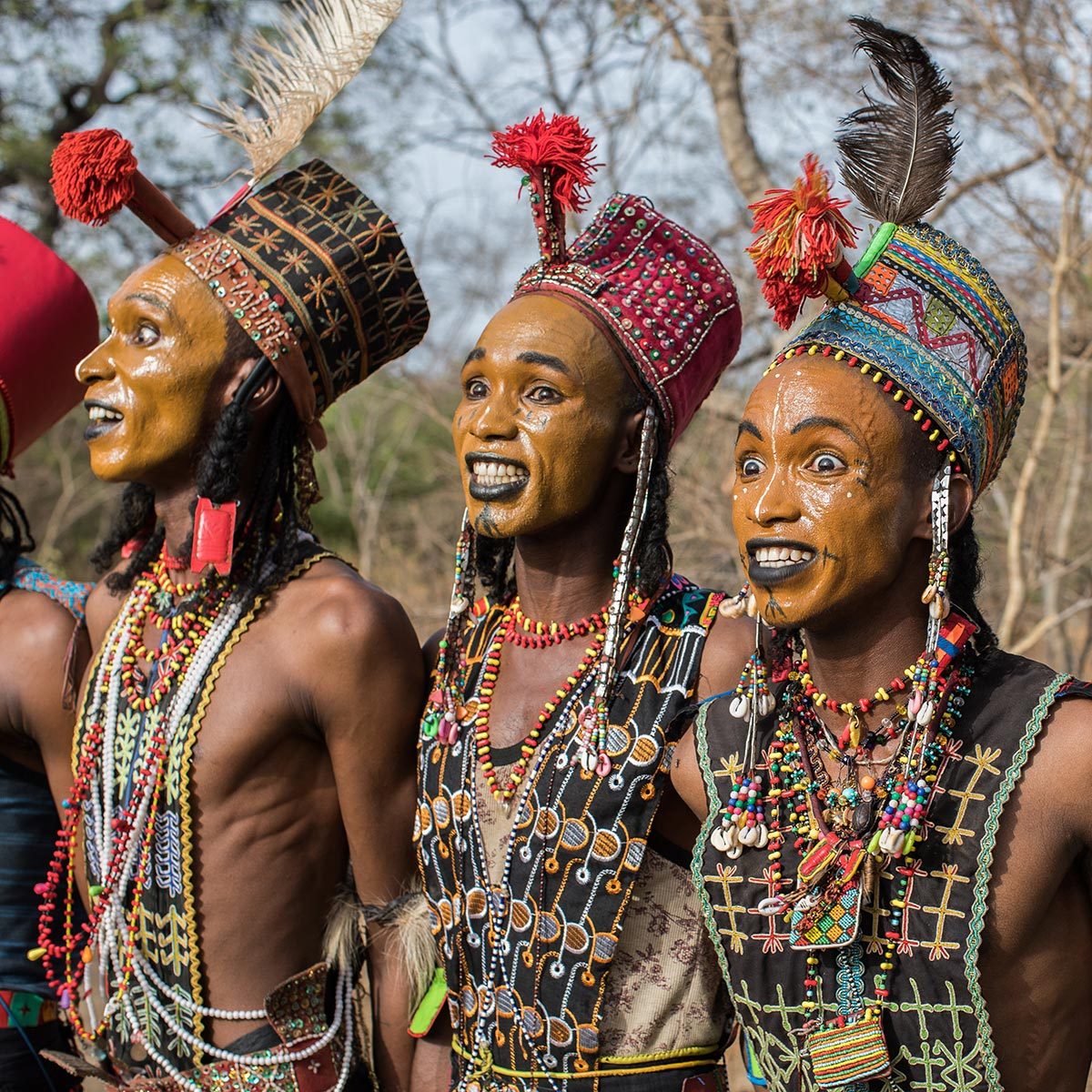 They are made up using desert clays, highlighting and showing as much as possible their teeth and eyes (whose whiteness is the maximum symbol of beauty for this ethnic group). That day, the women decide with whom to establish a relationship, lasting or temporary, being able to freely maintain intimate relationships during this night, even with different men. 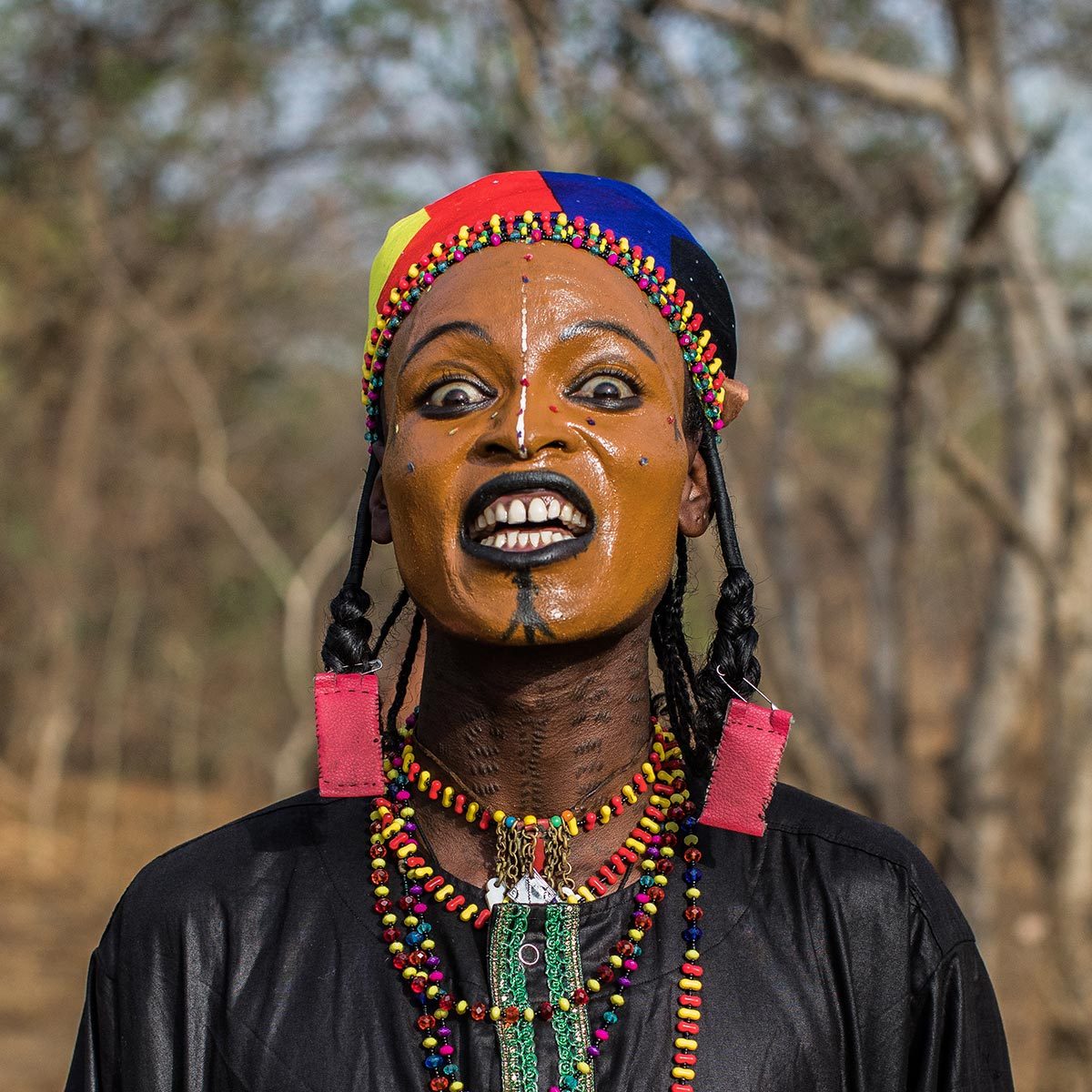 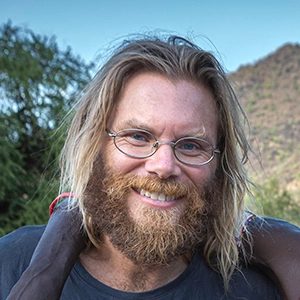 Below you will find the next departures that we have scheduled to visit chad-en.

Live in Chad with one of the most exciting peoples of the African Sahel and see the unfolding of its culture and aesthetic beauty in the Gerewol ceremony.

Live with one of the most exciting peoples of the African Sahel and see the unfolding of its culture and aesthetic beauty in the Gerewol ceremony.

Trip to Chad, route through the Ennedi desert

Travel-expedition through one of the most beautiful deserts on the planet and UNESCO World Heritage sites. The route has a strong ethnographic and nature component.